Boeing said Thursday that it has completed a software update for its 737 Max planes, a key step in getting the aircraft flying again after aviation authorities grounded the jets around the world following two fatal crashes.

Boeing said it is planning to work with the Federal Aviation Administration to schedule a certification flight.

Shares of the airplane manufacturer rose after it released its statement, trading up 2.8 percent late in the session.

The nearly 400 Boeing 737 Max planes in airline fleets were grounded by aviation authorities in mid-March after a second deadly crash of the fast-selling plane in less than five months. Investigators in the latest crash, in Ethiopia, have pointed to an automated anti-stall system the that pilots battled in the last minutes of both crashes. 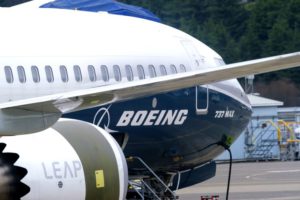 The system, known as MCAS, pushes the plane’s nose down repeatedly if the aircraft’s software senses it is going into a stall. That is a normal position to avoid a stall, but it can be catastrophic if the plane is not actually in a stall. Crash investigators have implicated the system in the Ethiopia crash and another 737 Max crash in October, saying it was triggered by bad data from the sensors.

On Thursday, Boeing said it has flown the 737 Max with the updated software for 360 hours on 207 flights. It also, as planned, has provided updating training materials for 737 Max pilots.

Some pilots complained that they were not told that the MCAS system was even on the planes, until after the October crash of Lion Air Flight 610, which killed all 189 on board. In order to transition from an older model of the Boeing 737 to the 737 Max, pilots said they were given training on a computer or tablet, with some courses that were less than an hour long. MCAS was not mentioned.

Boeing’s lack of disclosure has drawn scrutiny from lawmakers as well as the pilots. FAA’s acting chief, Daniel Elwell, at a House aviation panel’s hearing on Wednesday said the new MCAS system should have been included in pilot manuals.

How the Boeing 737 Max won approval from the FAA is the subject of several federal investigations and others by lawmakers.