Boost for exporters as airline freight charges drop by 50pc

Freight charges at the Jomo Kenyatta International Airport (JKIA) have come down by almost half due to increased capacity of airlines amid declining demand for cargo, giving exporters a huge boost.

JKIA has witnessed a sharp growth in capacity over the last one month, with the number of cargo airlines now standing at almost 12 from a low of three when the Covid-19 outbreak struck, pushing the cost of freight down to Sh236 for a kilo from Sh525 for the same quantity previously. 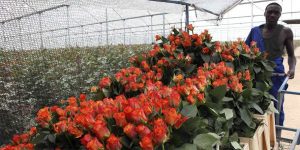 The move comes as a boost to players in the horticulture industry who have been grappling with high charges owing to limited capacity to ferry their produce to European countries.

“The increased capacity has come as a blessing to us because the freight charges have significantly dropped in the last couple of days as more airlines now fly to JKIA,” said Ojepat Okesegere, chief executive officer of Fresh Produce Consortium of Kenya.

Kenya Airways
chief executive officer Allan Kilavuka also pointed out that the charges have come down significantly in the wake of expanded capacity. “The capacity has increased and prices have dropped and so is the demand,” Mr Kilavuka said in an interview with Shipping and Logistics.

The Coronavirus pandemic has immensely disrupted flights, with many countries closing their airspace for passenger flights. Only cargo flights have been operational.

At JKIA, almost all foreign freight carriers had pulled out following low demand for cargo services after most countries cancelled the orders they had placed. However, most of them have resumed operations, jostling for available cargo. Some of the airlines flying to Nairobi at the moment include Qatar Airways, Ethiopian Airlines, Emirate Cargo, Lufthansa, Martinair, Etihad, British Airways and KLM among others.

Horticulture produce in the country has been low in the last couple of weeks with normal production expected to resume in the next three weeks.

The low volumes are the result of a number of factors, including heavy rains, pests and diseases, and lack of orders abroad.

“We expect the production to improve in the next three weeks as the crops that had been damaged have recovered with the once that had been pruned now picking up,” Mr Okesegere said.

Sanjeev Gadhia, the chief executive of Astral Aviation, said the capacity at the moment has dropped to about 1,500 tonnes a week from 3,000 tonnes previously. “The freight charges are coming down because of low demand at the moment with volumes having dropped at the airport,” noted Mr Gadhia.

Mr Gadhia, whose airline operate both in Africa and Europe, said they would reduce flights because of low demand.

The weekly capacity at the airport is now 1,800 tonnes against the volumes of 1,500 tonnes, meaning supply has outstripped demand.

Flowers normally form the bulk of the horticulture export from Kenya but the closure of the auction in Amsterdam has seen a significant reduction in amount of flowers that are shipped out of the country. The cut-flower export remains the largest earner in horticulture, contributing 73 percent of the total fresh produce annual earnings in 2019.

Flowers brought Sh104 billion last year, with vegetables emerging second by raking in Sh25 billion followed by fruits at Sh13 billion. The peak of the horticulture season in Kenya will start in September and run until May where the country witnesses high demand for the produce in the world market.

The government is working towards expanding the export market for the horticultural products besides the primary European markets that account for 40 percent of Kenya’s export. The new markets to complement the traditional European market include China, and lately the US, following the commissioning of the direct flight between Kenya and the United States.