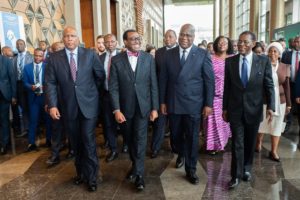 The African Development Bank (AfDB) President is making a passionate appeal to African governments to do more to help break down all trade barriers in the region.

Dr Akinwumi Adesina believes this would be one of the surest ways to aid successful implementation of the Continental Free Trade Agreement.

Dr Asdesina made these remarks at a high-level presidential dialogue on Boosting Africa’s Economic Integration on the sidelines of the African Development Bank meetings in Malabo, Equatorial Guinea.

He said research has shown that countries with open borders have greatly benefited from improved foreign direct investments, adding that “To integrate Africa, we should bring down all the walls. The free movement of people, and especially labour mobility, are crucial for promoting investments.”

Free movement of persons and goods

Recent research by the African Union, the African Union Commission and the Regional Economic Communities, on the Africa Visa Openness Index, showed that the region is making some progress on the free movement of people.

Dr Adesina said there is still more to be done to sustain these gains.

According to the African Development Bank, it has so far invested over $1 billion* to support trade finance which in turn has also helped support 111 transactions in 43 countries.

It has also invested another $1 billion in the AfriExim Bank, including $650 million for trade finance lines of credit and $350 million for trade insurance.  The President of the African Development Bank also noted that all these facilities should help deal with the funding challenge of the Continent Free Trade Agreement.

Why Afdb and AU pushing this free trade area deal?

The African Free Trade Area which has been signed by 22 countries as at April this year according to the Africa Union.

It is expected to make Africa the largest free trade zone in the world, with a combined GDP of over $3.3 trillion.

Throwing more light on this issue, the Afdb boss maintained that “this is what we need to turn the economics of the various African countries around. Pulling down non-tariff barriers alone will spur trade by at least 53%, and potentially double trade”.

Dr Adesina noted that to support this continental free trade agreement, there is the need for financial markets in Africa to also integrate, “therefore I would be trying to engage some of the operators of these market to see how we can fast track the process.”

What is the African Free Trade?

The continental Free Trade Agreement (AfCFTA) is an agreement between 49 African Union Member states with the primary goal of creating a single market, followed by free movement and a single currency.

It was signed in Kigali Rwanda on March 21 2018. African Union believes it would eliminate current high tariffs, generate employment opportunities for a rapidly growing young workforce and harmonize the work of already-existing regional economic communities.

Speakers at the Presidential Dialogue

President of Equatorial Guinea noted that even though he is committed to free movement recent increases in terrorist activities possess a major risk to this free movement of persons which is critical to the continental free trade agreement.