Minister of Trade and Industry, Alan Kyerematen has called on investors, especially those from Germany to take advantage of the enabling environment in Ghana to invest in the country as a way of deepening the commercial engagements between the two countries.

Addressing an investment forum in Berlin, Germany Mr Kyerematen said “Our interest as a developing country is to be able to deal decisively with the challenge of unemployment and we believe that it is the private sector that can lead the path to economic growth and job creation and that is why we are seeking to work together with the German government along this development pathway.” 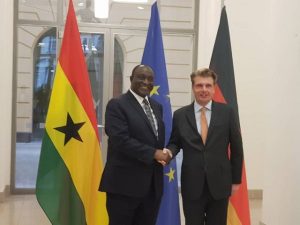 Mr Kyerematen told the German business community that Ghana has a strong and resilient economy and has arguably the best credentials in terms of democratic governance. He added that the country offers a safe and secured climate with a complement of infrastructure which is still being improved; as well as a good, fair, equitable and transparent judicial system.

According to the Minister, the prospects are even higher for German investors with the coming into force of the African Continental Free Trade Agreement which provides the single largest market of a population of over 1.2 billion people with a combined GDP of $3 trillion and a control of about 60% of the world’s arable land.

He also signed a Joint Declaration with the German Secretary of Economy and Energy to establish a Competency Center for Mining and Processing of Mineral Resources in Ghana.