Poor weather conditions across the globe are affecting the supply of peppers in many markets. In North America, growers were hampered by poor weather during the production and harvest seasons, as well as by the lack of pallets for transporting. Meanwhile in Europe the cold start to spring initially slowed down production, driving prices up at the start of the season, but the cold spell has also limited the consumption in many countries, causing prices to now drop. 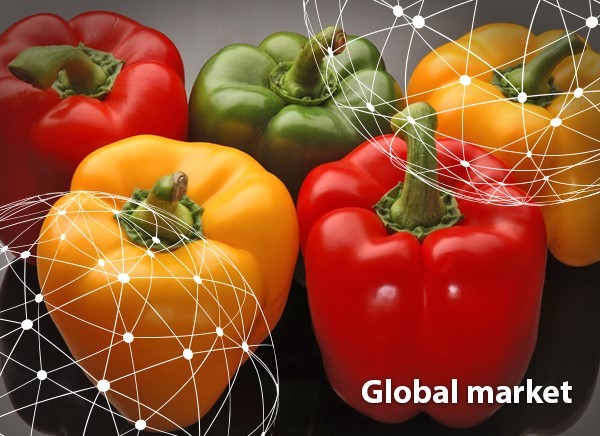 The Netherlands: Orders pouring in from various countries
“The first peppers were harvested in week 9 this year. Until week 18 the prices have been high, but very variable. As a result, the turnover differs per grower. The prices of green, yellow and orange are lower than in 2020, while the price of red peppers is more than 15% higher until week 18. In week 17 we saw more average prices for the time of year. Due to the amount of supply in week 18, prices are now under pressure. Historically we haven’t seen the pepper market this bad for the time of year, certainly not in this Whitsun week. Traditionally a good trading week anyway, according to a representative of a Dutch growers’ cooperative. “The market cannot cope with the current high production levels. Consumer demand is simply too low and the cold European weather is one of the culprits. Orders are pouring in from various countries, which is an unnatural situation. An improvement in the weather and a slightly lower production would be desirable at the moment, otherwise it could take some time before we get back to acceptable price levels.”

Spain: Low prices due to poor weather
The pepper campaign from Almería has finished and now Murcia is in full swing. Just a month ago there was not enough supply for the demand, as Almería finished earlier than usual and Murcia, as well as The Netherlands, started late because of the influence of the cold and rainy end of winter and start of spring. This left an empty market and sky rocketing prices. However, the situation now is quite different. Prices for Murcian peppers are on the floor for some weeks due to a very poor demand. According to an exporter this could be the result of the bad weather in most of the Central and Northern European countries, which is affecting the consumption, because it should be noted that the yields are smaller this year. The Dutch supply is also higher in the markets this year and the Spanish exporters think this could be because The Netherlands is sending less peppers to the North American markets. Many growers in Murcia are switching from conventional to organic pepper, which is becoming quite noticeable this year.

Italy: Prices vary as bulk of production is harvested
“For peppers, this year, we can say that it went quite well,” said a Sicilian producer. “However, although prices saw quotations well above 2.00 €/kg for a few weeks, the real average is around 0.85 €/kg, throughout the 2020/21 season. The bulk of our production, especially the extra quality, has been harvested; now the remaining crop is left to finish in June, with our standard peppers.” The price on 24 May 2021 is around 0.80 €/kg for red peppers, a little lower for yellow (0.64 €) and even lower for green, which is just over 0.30 €/kg.

According to a wholesaler from the north of Italy who also has close relations with foreign countries, “German retailers are doing promotions on Dutch peppers and this then affects the price at European level. For a few days now, the price range has been fluctuating between 1.20 and 1.70 €/kg and, as a result, the prices of Sicilian and Spanish products are also adjusting. According to the wholesaler, very often retailers prefer the Dutch product because it is more regular, uniform and homogeneous, while small shops focus more on the Italian one.

A wholesaler from central Italy who works only with Italian peppers, said that in the past few months, the price was as high as 4 €/kg, which is too high. In fact, on some days he didn’t sell it at all, because the prices were too high. Now the product is back to more normal values and the current Sicilian pepper is showing wholesale prices of 1.90 €/kg, processed in 1 kg packages. He only sells yellow and red peppers. He generally works with Sicily for 8-9 months during the year and the rest of the time with producers in the Verona area.

Poland: High expectations for coming bell pepper season
The season for bell peppers will start in the second half of June. According to multiple producers, there should be rather large quantities available this year. Demand has been high in the local market for the past few weeks and it is expected that the demand abroad will be satisfying as well.

As for the market, as the weather gradually heats up, peppers have entered the traditional low season for consumption. The Indian pepper sales continues to be weak. The domestic market has limited supply which has increased the supply pressure, and the price has been under pressure.

North America: Bell peppers face multiple challenges in production and supply
Weather challenges, limited pallets and high freight rates have collectively made for a higher than normal pepper market. In the West, production is currently out of Coachella, CA. “We’re seeing a healthy supply of red bell peppers here. Our green bell peppers will have a few more weeks here and then in two to three weeks, we’ll switch to Bakersfield,” says a local grower.

That said, overall production has been down out of Coachella. Challenging the crop were high winds at the start of the season which led to slower harvesting initially, as well as warm temperatures. (There are also some reports of California growers who lost peppers due to bloom drop and the heat.) Competing with Coachella product is also Mexican product coming out of Nogales, AZ.

In the East, Florida also had limited production thanks to weather conditions and less acreage–the state continues to lose agriculture acreage to housing development. And Georgia, in production now, also had weather conditions to contend with including extremely heavy rain, winds and some hail damage early on in the crop. “That caused some early plantings to be lost,” says a Florida grower. And around the corner, South and North Carolina also have limited production available since it’s in the early start of its season.

Meanwhile overall demand and pricing on peppers is strong, however, there are challenges in dealing with peppers. “A lot of California row crop farmers have diverted water supply to high-production crops such as almonds and other deciduous tree crops,” the grower continues. “So there’s a poorer supply of water for dry vegetables growing.”

High freight rates also continue to be a factor, particularly for West Coast growers. “Shipping peppers could compete against cherries, peaches, grapes and plums which are high-dollar cargo.” As well as this, coast to coast, the lack of pallets thanks to an overall shortage of wood also continues to affect growers and shippers.

South Africa: Varied prices for bell peppers
Green peppers are plentiful and their price is under pressure on the market, but since Monday there has been a shortage of red peppers and the price has risen. The price for yellow peppers is reasonable, a grower says. Pepper growers right in the north of the country come into full production in wintertime, when prices generally rise.

The average price on the market is R7.66 (0.45 euro) per kilogram. Prices haven’t been very good during May, a Limpopo pepper grower says, with a lot of fluctuations.

Australia: Exports rise as bell peppers increasingly grown year round
The majority of capsicums (bell peppers) are currently grown outdoors in Queensland, but increasingly capsicums are being grown year-round in high-tech greenhouses in the southern states for year-round supply. According to the latest figures, for the year ending June 2020, 71,718 tonnes of capsicums were produced in Australia, valued at $212m with 6 per cent sent to processing. While there was a seven per cent drop in the volume, there was a significant increase of 24 per cent in value. Exports also had a major jump, up 44 per cent to 506 tonnes, and a 74 per cent value growth from the previous year to $2.2million. There was also a slight rise in imports; up three per cent to 695 tonnes. At a consumer level, 61 per cent of Australian households purchased capsicums.

Chilli production was slightly down in 2019/20, according to the data. 2,092 tonnes were produced (down 7 per cent) and valued at $8.5 (down four per cent) with 23 per cent sent to processing. Very small amounts were exported, only 5 tonnes, and a value of less than $1million – while at the same time, 7 tonnes were imported. It is still a niche vegetable at a consumer level, with only 35 per cent of households purchasing chillies.