Fifteen farmers of private cashew nurseries in the Brong Ahafo Region have together produced a total of 400,000 improved grafted cashew seedlings for distribution to cashew farmers and potential investors interested in planting cashew. The nurseries are part of a plan to expand cashew farming in the country.

The 400,000 improved grafted cashew seedlings were produced in a period of eight months and are expected to be transplanted onto 10,000 acres of cashew farmlands.

Production of the improved planting materials was funded by the Ghana Export Promotion Authority (GEPA) at the cost of GH¢600,000 and is a component of a 10-year Cashew Development Plan, launched by President Nana Addo Dankwa Akufo-Addo at Wenchi in the Brong Ahafo Region.

The GEPA has targeted to produce additional two million grafted cashew planting materials for distribution in 2019.

The overall target of raising cashew nurseries is to increase cashew production from a current 80,000 metric tonnes to 300,000 tonnes, and in doing so increase export earnings from $197 million to $1 billion by 2027.

These came to light when the Chief Executive Officer (CEO) of the GEPA, Madam Gifty Klenam, toured some of the nursery production sites in the Brong Ahafo Region to familiarise herself with work being done on the grafting of cashew seedlings for prospective cashew farmers.

Some of the nursery sites she visited were the Techiman, Kintampo, Jema and Wenchi nursery sites and interacted with eight nursery farmers to find out challenges they faced in their line of work. 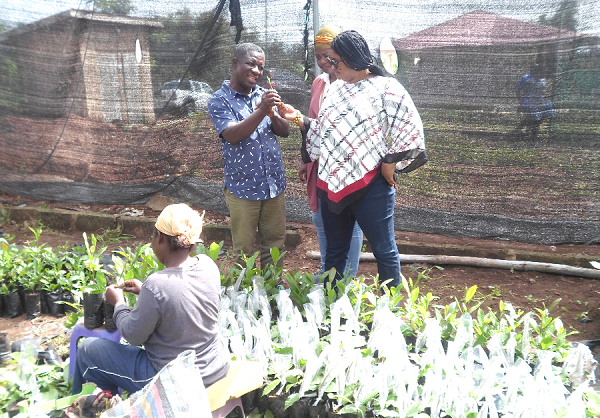 It is the expectation of the GEPA to modernise and transform Ghana’s cashew sector into a significant foreign exchange earner and as a means of creating jobs for some unemployed youth in the country. The nursery operators who were trained by the GEPA, have their planting sites at Wenchi, Sunyani, Kintampo, Techiman, Drobo and Jema, all in the Brong Ahafo Region.

The common challenges mentioned were the lack of scion for grafting on to rootstock of cashew for production.

The nursery farmers depend on the Ministry of Food and Agriculture’s scion bank at Wenchi but said they had been prevented lately from taking scions from the ministry scion bank.

Some of the nursery farmers in the region have had to depend on private individual cashew farmers or travel from place to place to pick scions for grafting.

Speaking to the media after the visit to Wenchi, Madam Klenam, who expressed satisfaction at the work done by the farmers, further promised to support them overcome some of the challenges.

She said the government was committed to supporting cashew farmers, particularly those actively taking part in the production of planting materials.

Madam Klenam added that she could not understand why the Ministry of Food and Agriculture was preventing the farmers from having access to scion produced purposely for planting and promised to intervene.

The Director of the Cashew Industry Association of Ghana (CIAG), Mr Aaron Akyea, noted that the establishment of cashew nurseries had become necessary due to previous shortages of cashew grafted seedlings, adding that regrettably farmers who were ready to cultivate or expand their farms were not getting the seedlings.