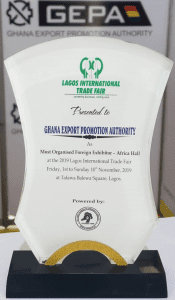 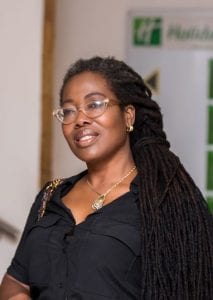 The confluence of Hard work and determination is establishing this year an auspicious one for Ghana Export Promotion Authority (GEPA), as it celebrates its 50th Anniversary.

At the just ended 2019 Lagos International Trade Fair, GEPA was adjudged the Most Organised Foreign Exhibitor at the African Hall during an Award ceremony organised by the Lagos Chamber of Commerce and Industry to mark the end of the 10-day fair. Presenting the award, the president of the Lagos Chamber of Commerce and Industry, Mr. Babatunde Paul Ruwase expressed his gratitude to GEPA and the entire Ghanaian contingent for the effort they put in to ensure a very successful fair. He thanked the leadership of GEPA for the collaboration and the behind scenes effort at getting the exhibit-laden truck to the fair grounds on time before the commencement of the fair.

Recognizing the critical role of the AfCFTA in promoting intra African trade, the Lagos Chamber of Commerce and Industry designated a whole pavilion for all African Countries. The idea was to showcase the unique identity of the continent and its value propositions. Some of the African countries were Ghana, Cameroon, Ethiopia, and Nigeria amongst others.

GEPA in line with its market development and promotion agenda, coordinated the participation of 37 companies. The companies that participated are categorized into 4 main sectors, captured broadly under manufacture and Handicraft. The four main sectors were, Handicraft & Home Décor, Cosmetics & Body Care, Food & Beverages, and Fashion & Clothing.

One interesting feature of the 2019 Lagos International Trade Fair was the patronage. Many of the exhibitors were able to sell all  their wares before the end of the fair. Records of deals struck and myriads of distribution channels as well as contacts were created.

The Lagos International Fair is an annual event organised by the Lagos Chamber of Commerce and Industry. It is one of the biggest fairs in Africa, attracting over 100 countries to the fair. 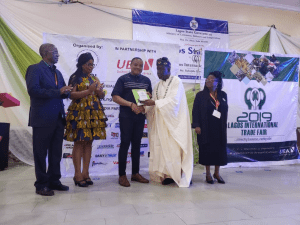