Construction of the VALCO plant began in 1964 and commercial production of aluminum began in the Plant in March 1967. Prior to that a series of discussions had taken place that culminated in the signing of an agreement for the construction of the Akosombo Hydro-electric Dam that also resulted in the establishment of VALCO, then owned by the two American Companies, Kaiser Aluminum & Chemical Corporation (KACC) with 90% and Reynolds Metal Company which later became Aluminum Company of America (ALCOA) with 10%. VALCO is currently owned 100% by the Government and people of Ghana. 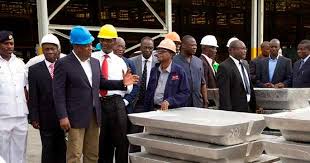