A shea butter processing factory, to be constructed under the government’s ‘One District, One Factory’ programme at Bogrigo, in the Bongo District of the Upper East Region will engage about 200 people in the District when completed.

Mr. Peter Ayinbisa Ayamga, the District Chief Executive (DCE) for the area has said the Business Advisory Centre (BAC) and the Rural Enterprise Programme (REP) were finalizing documentations for construction work to commence by the end of November this year, and would reduce unemployment among the people in the District.

The DCE said a total of 50 people would operate the factory, apart from the 200 people that would be engaged, adding that the Assembly had so far interviewed about 194 applicants in readiness for engagement in the factory.

Mr. Ayamga said this when he met the press at Bongo to showcase government’s programmes and policies, implemented in the District over the years, and to afford Journalists the opportunity to interact with officials of the Assembly.

The DCE said apart from the factory which was yet to commence, a Warehouse which has a capacity to store about 1000 metric tons of grain, located at Bogrigo which he said would be the industrial hub of the District, was about 80 per cent complete.

He said the Warehouse which is meant for commercial farmers, has offices, grain testing laboratory and washrooms, and stressed that “this is not a non-existing project. It will not be long, we will commission it, put it to use and our farmers will begin to reap some benefits.” 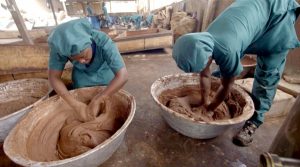 On the One Village – One Dam project in the District, Mr Ayamga, who is also the Parliamentary Aspirant for the New Patriotic Party (NPP), indicated that 10 dams were earmarked for the first batch, and seven were at various levels of completion at Feo, Kabre, Ayopia, Kodorogo, Kuyelingo, Sambologo and Goo, “Work will continue this dry season,” he said.