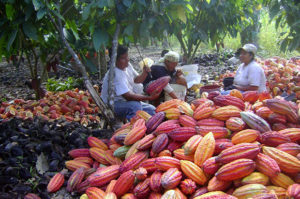 Stakeholders in the cocoa value chain have agreed to a proposal by the two leading cocoa producers in the world to set a minimum price of US$2,600 per tonne for the cash crop after a historic meeting in Accra, a source close to deal has told Citi News.

The two-day meeting held in Accra, which was called at the instance of the two countries, was attended by processors, traders, chocolate manufacturers among other organizations that play various roles in the cocoa industry.

Following the announcement of the decision, sources say a technical committee is later expected to be constituted in Abidjan, Cote D’Ivoire on July 3, 2019, to plan a road map for the implementation of the floor price regime.

hen the minimum price becomes effective,  the two countries will no longer sell cocoa beans on the world market below the US$2,600 floor price.

Currently, a tonne of cocoa, according to the International Cocoa Organisation, is being sold in excess of US$2,390 on the world market. The goal of the two-day meeting is to discuss the possibility of agreeing to a minimum price which is enough to keep the cocoa farmer in business.

A joint press conference by the two countries, Ghana and Cote d’Ivoire, is expected to make an official announcement of the outcome of the meeting.

The meeting was necessitated by the fact that the two countries only get US$6 billion annually in the US$100 billion-dollar chocolate industry despite producing more than 60 percent of the world’s cocoa needs.

The two countries last year unveiled plans to coordinate cocoa production and marketing as part of efforts to exert more control in the market after price volatilities in recent years.